I started getting an idea of what I wanted the reception centerpieces to look like (inspired a little bit by the image on page 39 from this Nonpareil magazine) when I spotted some small glass hobnail cake stands on sale (50% off!) at Hobby Lobby and snatched them up!  I decided I wanted to have a small bunch of peonies (more on the flowers in the next post) in a short little vase on top of the cake stand and surrounded by . . . something?  That something materialized when I spotted these free printable favor boxes on Style Me Pretty – I loved the design and thought green would be perfect with some pink peonies!  So after using my limited editing skills, I was able to replace the “love is sweet” line on the boxes with our new monogram on one side and the date of the wedding on the other.

At this point (i.e. before the cutting and folding began), I was feeling very clever, especially when I got the correct cardstock to print them on for 50% off at Hobby Lobby.  Eventhough about halfway through cutting them all out, folding them and glueing them together I was ready to give up and say that they were probably my worst idea ever, I’m so happy with how they turned out and I love how they looked on the centerpieces! 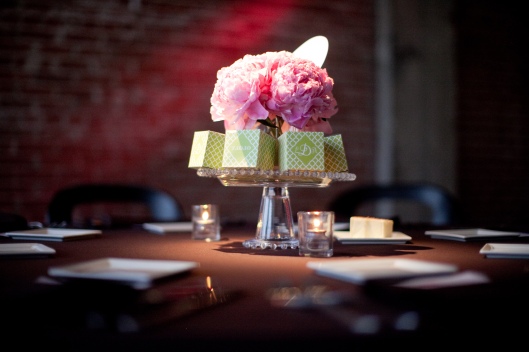 Making the boxes was quite a bit of work, but we also faced the task of trying to decide what to put in them. . . “how about Sour Patch Kids?  We love those . . . ” “We can’t give people a whole box of Sour Patch Kids, it would look dumb.”  “Ok, what about chocolate covered pretzels?”  “Well, I might be on board with that, but only if we can get both white chocolate and milk chocolate – I want some variety!” . . . and so on and so on . . .

Ok, in retrospect, I may have been slightly unreasonable in my hunt for the perfect favor box fillers, but it was, like, 3 days before the wedding and I was crazy.  In the end, we went with half chocolate covered pretzels, half frosted animal cookies (the kind with sprinkles)!  Yum!